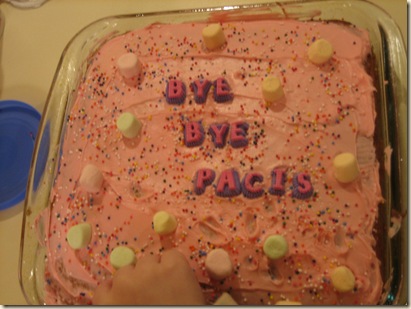 Thursday, January 8, 2009 marks a monumental day in Emma’s life… this is the day we said goodbye to pacifiers! Sound dramatic? Well it was!

You see, Emma has been attached to her pacis from Day 1. As a newborn, the paci was our lifeline! 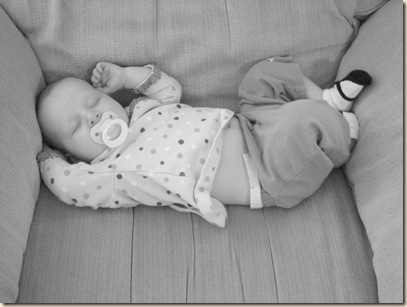 Over time, Emma’s fondness for her pacis took on a new form. Rather than requiring one paci at bedtime, she needed TWO, then THREE, then FOUR. Then the request for pacis became very specific: “Mommy, I need the BLUE paci.” “Daddy, I need the ORANGE paci.” Then she became slightly OCD with the pacis: “Daddy, wash the pacis, pacis are dirty.” She also began hiding the pacis- everywhere!

Her fondness became an addiction! Much like my addiction for Dr. Pepper or Starbuck’s- she just HAD to have them!

I’ve heard so much controversy regarding when to wean off of pacis. I’ve heard many people say it’s best to wean before 6 months- before they truly become attached. I’ve heard others say to let babies use their pacis until they have finished teething. I’ve also heard some say to let a child naturally wean themselves.

Robin and I decided to go with our own instincts on this one- now just seemed like the right time for Emma. Do I regret not weaning sooner? Not at all. Those pacis have gotten Emma through some really rough times- they’ve helped her through ear infections, plane rides, car rides, teething, scary dreams, boredom, etc.

So, how did we do it? Robin had the idea to have a paci party to say goodbye to the pacis. Emma is such a logical little girl- she likes for things to be explained to her. We began preparing her last Monday for her paci party. We talked it up BIG! She asked about it several times throughout the week. (Remember, she just had two Birthday parties and Christmas less than a month ago so she really has parties on the brain!)

The kitchen was decorated for the party when she woke up on Thursday morning- we had Dora plates and napkins, streamers, and balloons.

On Thursday night after I got home from work, we all cooked ‘breakfast for dinner’- our family’s favorite meal! We had biscuits, eggs, and bacon. While daddy was cooking the eggs, Emma and I iced and decorated the cake- a rainbow sprinkle cake with strawberry ice cream. We ate a yummy dinner, then served the cake and ice cream. Emma ate every bit of dinner and dessert. 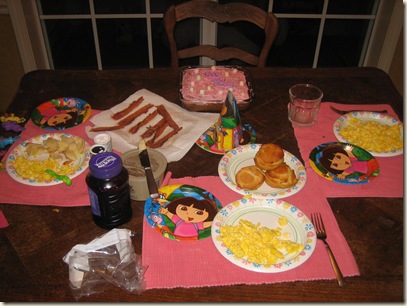 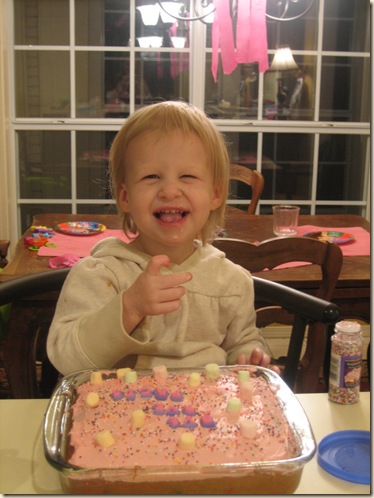 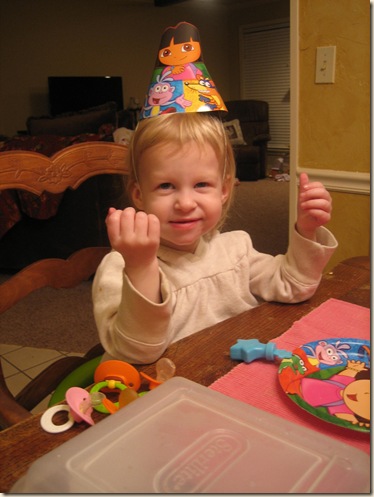 After dessert, we collected all of Emma’s pacis and put them in front of her. We told her to say goodbye to each of them… and she did! She kissed each one of them, told them goodbye, and put them in the box. My favorite part was when she put the very last one in her mouth to suck on for 15 seconds before giving it up. :)

All in all, it went great. Emma went to sleep without asking for a paci at all! We were amazed. She did wake up twice during the night and just wanted some TLC, and we were more than happy to give it to her.

I think this whole process was more traumatic for mommy and daddy than for Emma!

Those of you who have seen Emma with 2 pacis in her mouth at the same time know that this is HUGE.